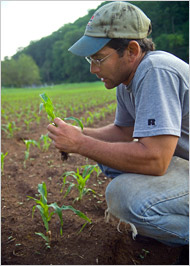 WAIT-LISTED for broccoli rabe? I blinked at my computer screen in disbelief. In fact, it was worse than that. A polite, regretful notice on the Web site for Fort Hill Farm, an organic producer here, informed me that the wait list for a seasonal share in the farm’s C.S.A., or community-supported agriculture program, is now closed until at least 2009. And it’s not sure when the list can be reopened.

Having munched and swooned our way through Fort Hill’s chard, heirloom tomatoes, fingerling potatoes and other dewy fresh produce for a few years at local farmer’s markets, we thought we would look into a C.S.A share: Pay the farmer up front in February and pick up a box of vegetables, herbs and fruit weekly from June to October at the farm or at designated drop spots. C.S.A. shares are generally calculated to provide a week’s worth of fresh, organic, locally grown produce for a family of four. Some farms, like Fort Hill, also offer pick-your-own options that send shareholders into the strawberry and tomato rows.

Paul Bucciaglia, Fort Hill’s proprietor, was in his barn mending wooden display stands for this sold-out season when I showed up bemoaning his success. Tanned, compact and bespectacled, Mr. Bucciaglia offered a hand seamed with the patina of an average day: loam, chlorophyll and a sprinkling of sawdust. “I’m a vegetable grower. Why am I news?” he asked affably. “It’s almost a little sad that we’re talking.”

Nonetheless, he is voluble on the subject of disappearing or unaffordable farmland in Connecticut — a problem that limits how much his business can grow. Most of the state’s veggie consumers still don’t know a C.S.A. from a G.P.S. Yet the demand for buying quality, locally grown food directly from farmers is so great that the area’s organic growers cannot meet the demand; Holcomb Farms in West Granby, the only farm comparable in size to Fort Hill, sold out its 350 shares for this season before last Thanksgiving.

Fort Hill operates on a lovely tract of rich, well-drained soil leased from the Sunny Valley Land Trust, which is mandated to keep some of its land in cultivation. Driving up from the south, the stretch of Route 7 long bordered by cornfields, farm stands and silos is now an unlovely sprawl of condo developments, corrugated-metal big-box stores, a megachurch surrounded by acres of steaming macadam, and several plots of gouged and bulldozed landscape with signs advertising “Topsoil for Sale.” The most fundamental element of the state’s rich agricultural past is being trucked off for gated estates and golf courses.

“The problem is that we’re not saving enough farmland,” Mr. Bucciaglia said as we headed out to his fields. “We’re not getting the people who are trained to do the next generation of farming onto the land. And we’re not supporting those who are.”

He thinks that FarmLink, the state’s year-and-a-half-old Web site designed to connect farm owners with others seeking land, is a good resource, but that preservation efforts are lagging. Mr. Bucciaglia cited a nearby property I had asked about that has been scraped of its topsoil and sits, ugly and forlorn, with a “For Sale” sign.

“That could have supported a family,” he said. “That’s where things go awry in Connecticut. There’s just so much money flying around. I’m sure somebody in the financial industry would look at this farm and say, ‘What a waste of land.’ I’ve had several people say that to me — that this should be a housing development or an industrial complex. That’s based on the idea that we can keep trucking food from other places indefinitely. I don’t know how long that’s going be true.”

A bluebird flashed across the rows of fennel as Mr. Bucciaglia pointed to a construction site bordering his fields. “We’re getting neighbors. They’re going to put 36 units of condominiums right across the street.”

The most pressing mandate, as he sees it: “We need to move a new generation of farmers onto the land as the older farmers in this area, who generally produce commodity crops like bulk milk or hay, retire. What’s special about market farming is that fresh local produce is in high demand, and a good living can be made from a small acreage.”

When winter winds howl and his venerable fleet of used tractors stands idle, Mr. Bucciaglia does his thinking. And ciphering.

“I crunched the numbers in this state,” he said. “Anybody in the legislature wants to call me, I’ve got the numbers. There should be one of these farms for every 50,000 people — 200 C.S.A.’s the size of Fort Hill Farm — in this state. Now there’s two. Us and Holcomb Farms. There are several with 100 to 150 shareholders, and maybe a dozen that have 25. I can only serve 380 families. Every town should be setting aside a piece of land like this. And they’re not.”

As a pair of chickens began a noisy disagreement, Mr. Bucciaglia said that he had recently found one of their number dead just inside a greenhouse. As he bent over the carcass to determine the means of dispatch, a huge red-tailed hawk sauntered past the farmer, ignoring him, and tucked into his fresh-killed meal.

Raptors, like land developers, get their nourishment by pouncing on the main chance. But for the rest of us arugula eaters, it’s looking like a mighty long wait for a local share.